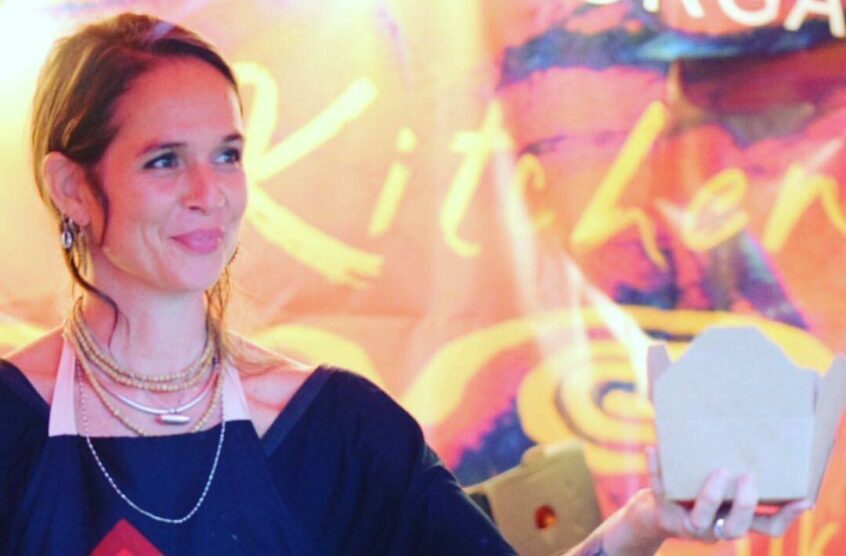 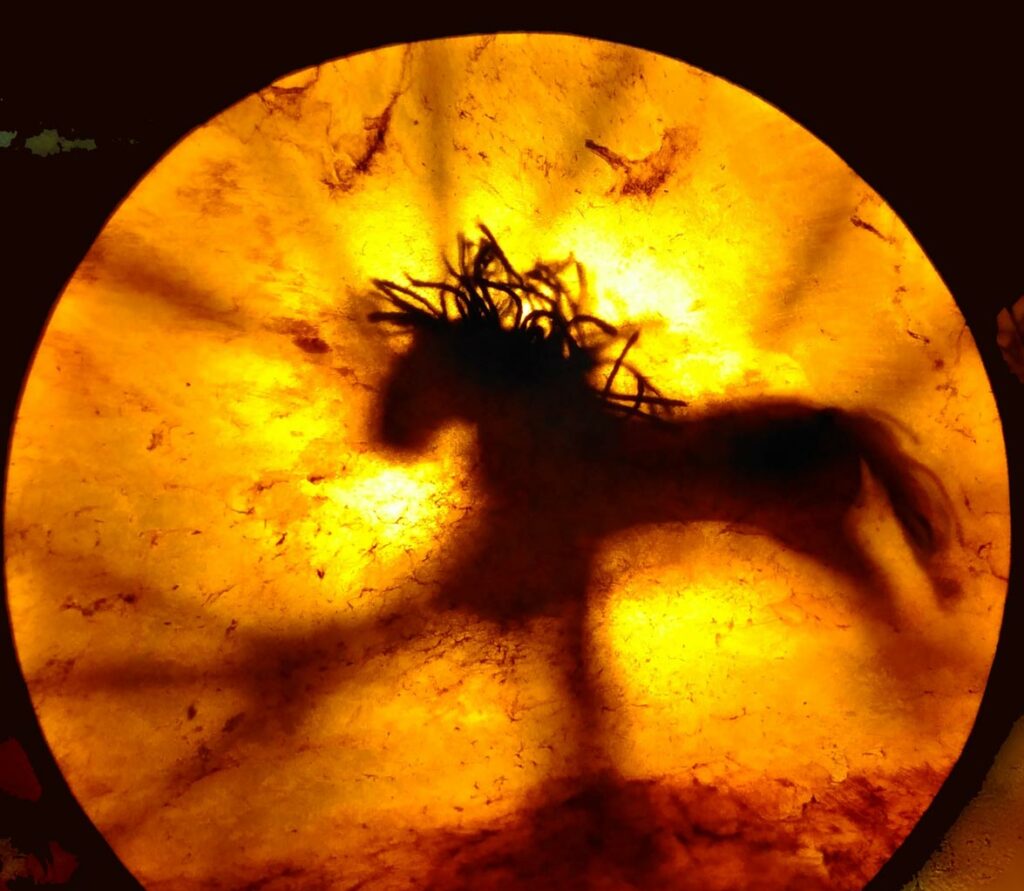 June 2019:  “ENOUGH!” I am shouting.  “Enough of saying yes when I mean no.  Enough of the voices of women being silenced.  Enough of the bodies of women not being honoured.  Enough of the Goddess being written out of the story.  Because we need her, now more than ever.”  The bright lights are on me as I prise apart a bridle and bit, hurling the pieces of leather and metal to the four corners of the stage.

I’m at the Burton Taylor Theatre, and this is the climax of my one-woman show, Rhiannon Unbridled, my telling of the medieval story of magical and oppressed horse-goddess Rhiannon, along with autobiographical storytelling exploring where my life intersects with her story.

I am a sofly spoken person usually.  I grew up with the school motto, “Quietness and Strength.”  My father-in-law who saw the show, remarked that he had never seen me angry before.  I wasn’t planning to make a one-woman show.  So how did I get here?

November 2018: I am running a course I call Embodying the Goddess and it is the session on voice.  I am holding this space for others, but of course, I am moved by it too.  Whilst the other women are writing about their relationship to their voices, I write on a postcard: “I WANT MY VOICE TO BE HEARD.”   In that moment I fired my arrow into the future.  I didn’t know how, or where it would land, but my prayer was heard.

This is a blog about what happens when you empower women.  When you gather them together in circle, remind them that they are loved and connected to earth, and populate their mythic imagination with powerful archetypes of Goddesses.  When you listen to them, accept them just as they are, and encourage them to be more of that, more of themselves, more confident in their inner authority, more courageous in their unique expression.

This week, in a month when we’ve had International Women’s Day, Mother’s Day and vigils to commemorate the violent death of another sister, I am launching another iteration of Embodying the Goddess.  I was curious to know how the course had affected the women who took part in 2018, so I rang some of them up and asked.  These are their stories.  (Some names have been changed to protect anonymity.)

Sarada
When Sarada began the course she was recovering from a serious illness.  It was one of many things that she did for healing and self-development.  Somewhere during the course she began to manifest an idea that she’d been thinking about for a long time – to make a vegan cookery business touring to festivals.  She called it Shakti Kitchen.

“Shakti is the dynamic, creative, feminine life force that we have in this material universe that we’re part of.  That energy is what I based the feeling of my business on.  I call in Shakti all the time when I’m cooking.  It’s a vibration I want to impart to people who come to my stall.  My festival tent was red, a womb-like energy, a nurturing, maternal space.  When we were doing festivals, people were drawn to the stall.  We always had people coming to volunteer.  We were holding others in this Shakti energy, and we were also held in it ourselves. 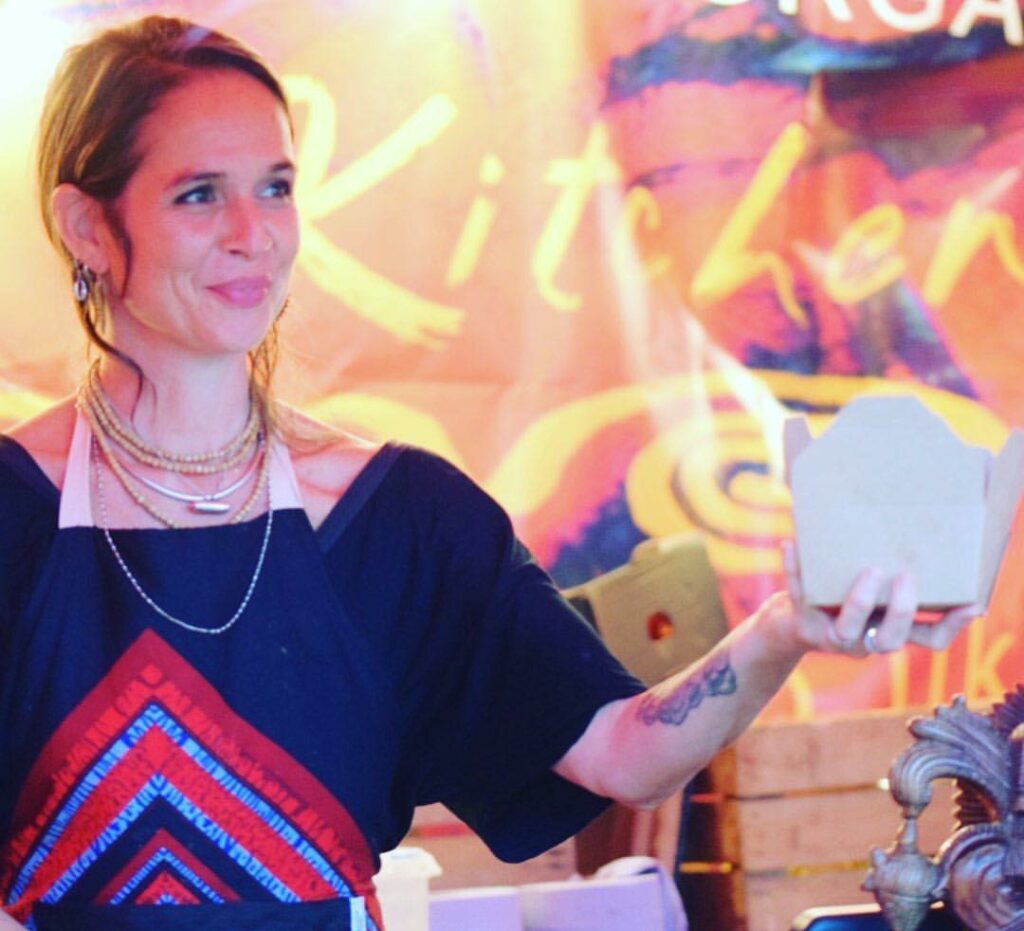 “After the first festival, as we were driving away, there was the most beautiful, massive crescent moon in the sky that followed us the whole way.  I took it as a blessing from Shiva [who is strongly associated with the crescent moon] because we were being carried by Shakti, his feminine counterpart.”

When I ask Sarada about how the whole idea came about, she said, “I didn’t plan to do it.  It was more that opportunities presented themselves and I just said OK.  I was brought up in the Hare Krsna faith, with the idea of surrendering to the divine plan, but I think your practices were so embodied they brought it out of theory, into something more tangible and real.”
[NB: Shakti kitchen is now serving take-aways in Oxford]

Rebecca
Rebecca was 70 years old when she enrolled on Embodying the Goddess course.

“The practice that made a huge impression on me was barefoot walking.  It showed me how disconnected I’d got.  Grounding had always been an issue for me.  Doing this practice regularly left a lasting change.  I really do feel more connected with my feet.  There’s a pulse of energy in my feet.  People have remarked on how much more present and grounded I am.”

Working with goddess archetypes gives us more vocabulary for the psyche to draw on when the need arises.

“Recently I’ve been meeting the energy of Kali.  My grandson at age 8 is now a fierce little warrior.  I’m not the grandmother of babies any longer.  Something else is demanded of me.  Also, I’m involved in political protest, and through this I’m discovering a pirate queen alter ego.  She really needs to come out right now.” 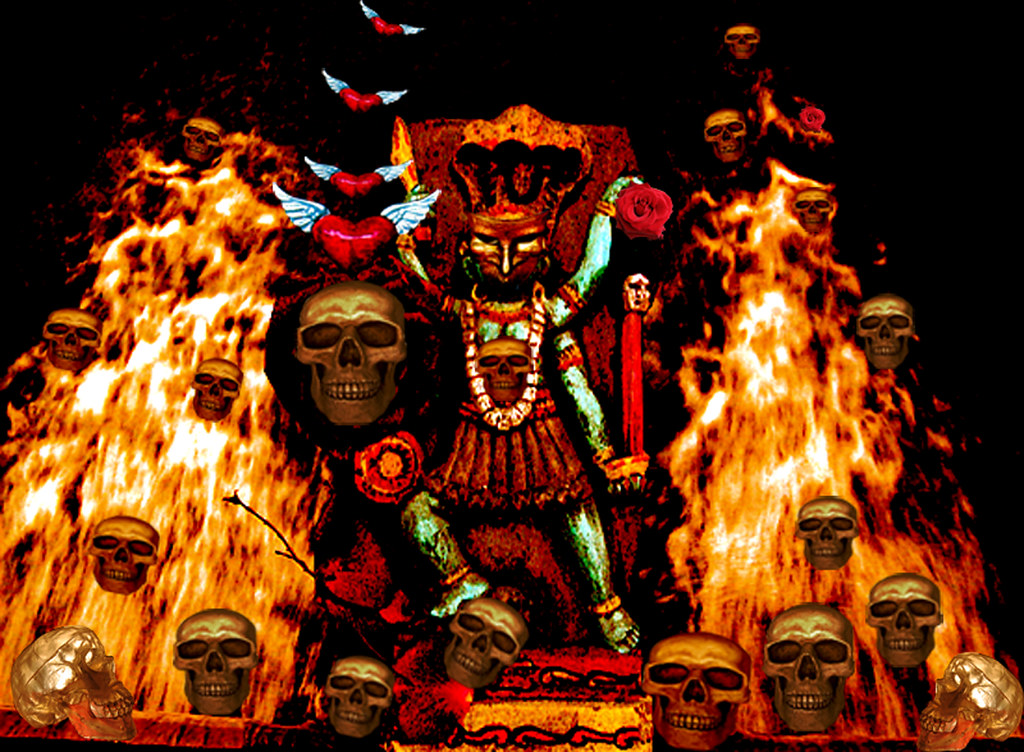 “Kali is destroying old boundaries” by Cornelia Kopp is licensed under CC BY 2.0

Martha
“The session I remember most clearly was the one about voice.  I was just going to say a few words, but all this stuff came out of me.  It was cathartic, very powerful, not to censor myself, to speak without fear.  Since then, I’ve been more willing to say what I think, not what people want me to say.  I’ve been more open about being bi-sexual.  I went to Pride, wearing the bi flag in my home town where anyone could see me.  I don’t think I’d have been that brave before.

“I’m much more connected with my body, having been disconnected from it for so long.  I’m able to notice emotion in my body, whereas before it was only intellectual.  Now my body, mind and emotions are much more together.  Recently, when I got a shock, I noticed the emotion, and was able to shake it out and move through it.”

For a long time Martha has used tarot and oracle cards for guidance.  Recently she’s noticed she’s been more willing to trust when she is able to receive the guidance this way and when she’s not.  “I let my body tell me what to do, not the cards”.

Marion
“In the first session you asked us to bring something to the altar that represented our relationship to the divine feminine.  I picked a posy of little flowers from your garden and brought them.  It didn’t feel like much at the time.  In fact I felt a bit self-conscious, but now I look back it’s completely right.  The thing I’d always been interested in was Nature, Gaia if you like, the Earth.

“What I was looking for at the start of the course was ‘self-expression in a worrisome world’.  I’d been feeling dormant in the world, absorbed by family life.  I knew that what I wanted to do was something to do with people and nature, healing the broken relationship between them.  The course, and in particular journaling during and between the sessions, brought this to the front of my mind and gave me confidence that this is it: this is who I am.  Since then, I’ve become a forest bathing practitioner and I’m launching my own business.  Now I’m opening up to plant spirit medicine, which is a whole new dimension.

“I have a sense of evolution in my own spiritual journey.  Embodying the Goddess gave me the context and confidence to explore the feminine divine and deepen my relationship with the natural world.” 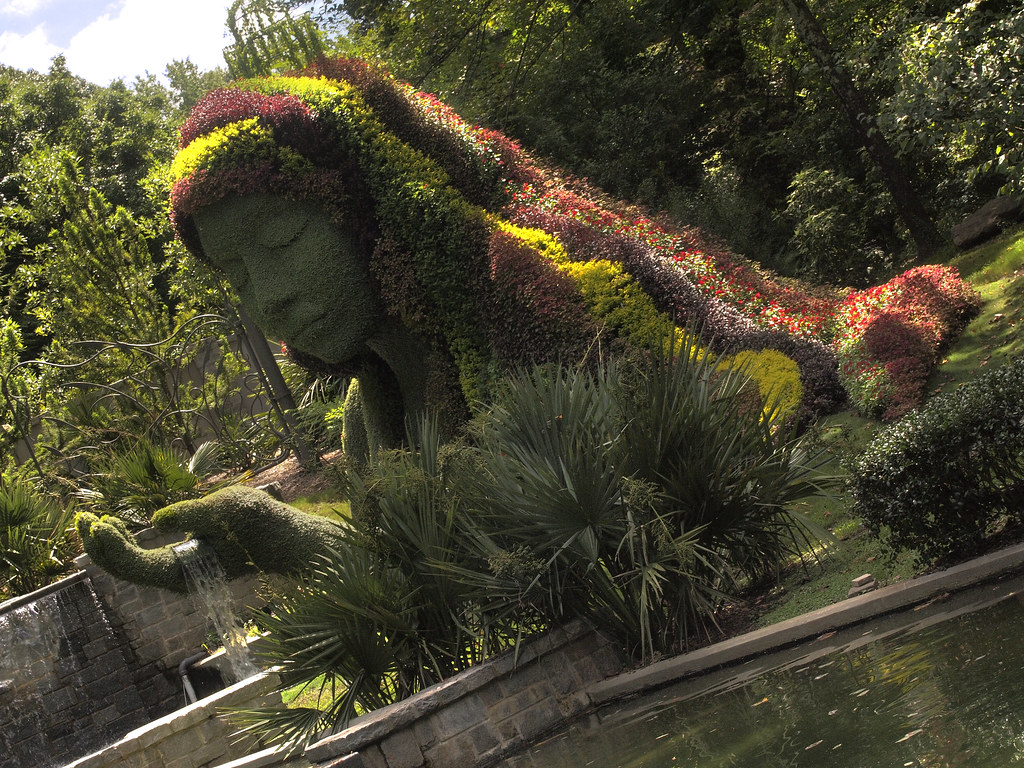 “Earth Goddess in summer (04)” by Thomas Cizauskas is licensed under CC BY-NC-ND 2.0

Conclusion
So, what happens when you empower women and connect them up with their inner authority, and you remind them that they are loved and blessed and one with the earth?  They go on to create beautiful things – forest bathing businesses and vegan kitchens that spread the love of the embodied mother.  They tell their truth, and go on marches and allow themselves to be seen.  They become more present and find the energy to meet the needs of their grandchildren.  They take themselves into political protest.  They make one-woman shows.  Imagine all the people who have been touched or inspired by what these women have done.  The ripples go on.

We need circle spaces that root us in our truth.  They give us confidence that our voices matter.  Then we can take our visions out into the world, which isn’t yet a very accommodating place for them.  But the more we do it, the more we create the fertile ground that we need for more of this heart-centred, embodied, loving, compassionate, integrated, earthy, authentic, feminine expression.

My work is one offering among countless thousands that together make up a movement quietly undoing the Patriarchy and bringing through a more balanced, compassionate world.  Each week we focus on a different body part, from feet to mind, hips to heart, working with song, story, movement, ceremony and creativity.   The next Embodying the Goddess Course begins online on 22nd April, and bookings are now live.  If you want to join me in this particular strand of the revolution, and have plenty of fun in the process, click here for more info.  Or, to keep in touch with all that’s on offer from The Hummingbird Lodge, join the mailing list.