This year in my work as a celebrant I have had the great pleasure of presiding over two weddings and a civil partnership, all joyful and memorable occasions, and relationships I have faith in. However, much as we want to believe in ‘happy ever after’, sometimes a relationship comes to an end, just as a life ends, and if this happens, what are we to do with the passionately declared vows and symbols of our marriage?

It’s a subject I feel strongly about because of personal experience.  I married at the age of 26, and after 8 years of harmonious cohabiting, and 5 years of marriage, I found myself having to acknowledge that our relationship was going nowhere.  Although the idea of separating terrified me, I had to accept that it was in both of our interests. We were legally married, and the legal divorce process had its own logic and timescale. But since we had also bound ourselves together with ceremony and magic I felt we couldn’t just ignore that and walk away. I needed a ceremonial unbinding.

Being a lover of ritual, our marriage ceremony had been a beautiful occasion.  It had also been a real community affair, into which many people had poured love and creativity.  One of the things that pained me about my relationship breaking up was that I felt the people who had been inspired by our wedding and given their energy to it were being let down.  So when it came to divorce I felt that something needed to be done which was public, to some extent, as well as personal.

I had heard of a Native American ritual called Cutting the Ties that Bind.  This is something that can be done by an individual whenever they feel that someone else has an unhealthy influence over them.  In essence, you take two sticks, one representing yourself and one for the other person, and use wool to bind them together.  Then, at a later point, you deliberately and prayerfully cut the wool, and throw the sticks as far as possible in opposite directions. 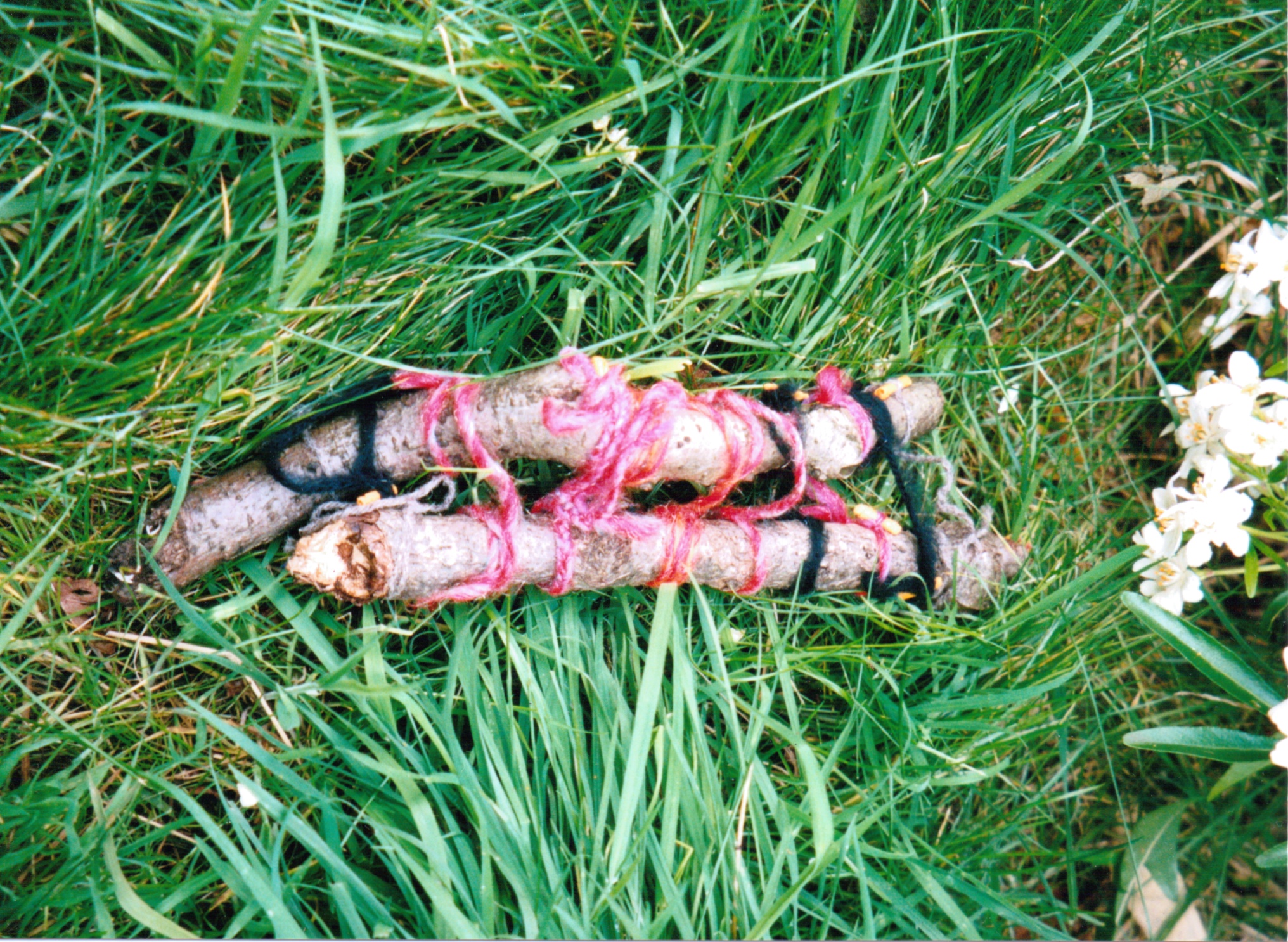 Using this as my model, I took two sticks and started to attach pieces of wool.  I found it helpful to tease out all the different strands of the connections between me and my husband, so as I worked I labelled each strand with a little piece of paper.  There were strings for ‘sharing a home’ and ‘being married’ as well as ‘being lovers’ and ‘sharing the dream of having children’.  There were also strands for ‘being part of each other’s families,’ and simply ‘love’.

At this point I worked on my own as I didn’t know whether my husband would want to take part.  Having got this far, I proposed the idea to him, and asked for support from a wise counsellor who we had been seeing to help us to communicate with each other as we separated.  She agreed to hold the space for this event, and, somewhat to my surprise, my husband agreed to do it.   We asked a friend if she would host the occasion in her living room (which had a fireplace and two doors), set a date, and invited six close friends who had been at our wedding, and were willing to be witnesses.

The ritual took place at a time when we had been living separately for a few months, but had not yet sold our house. Having the date in the diary helped me to know that our separation was real and going to be permanent.   I knew that after the ritual there could be no turning back.  Also, since I hadn’t initiated the end of our relationship, it gave me some small sense of control to be initiating this ritual. 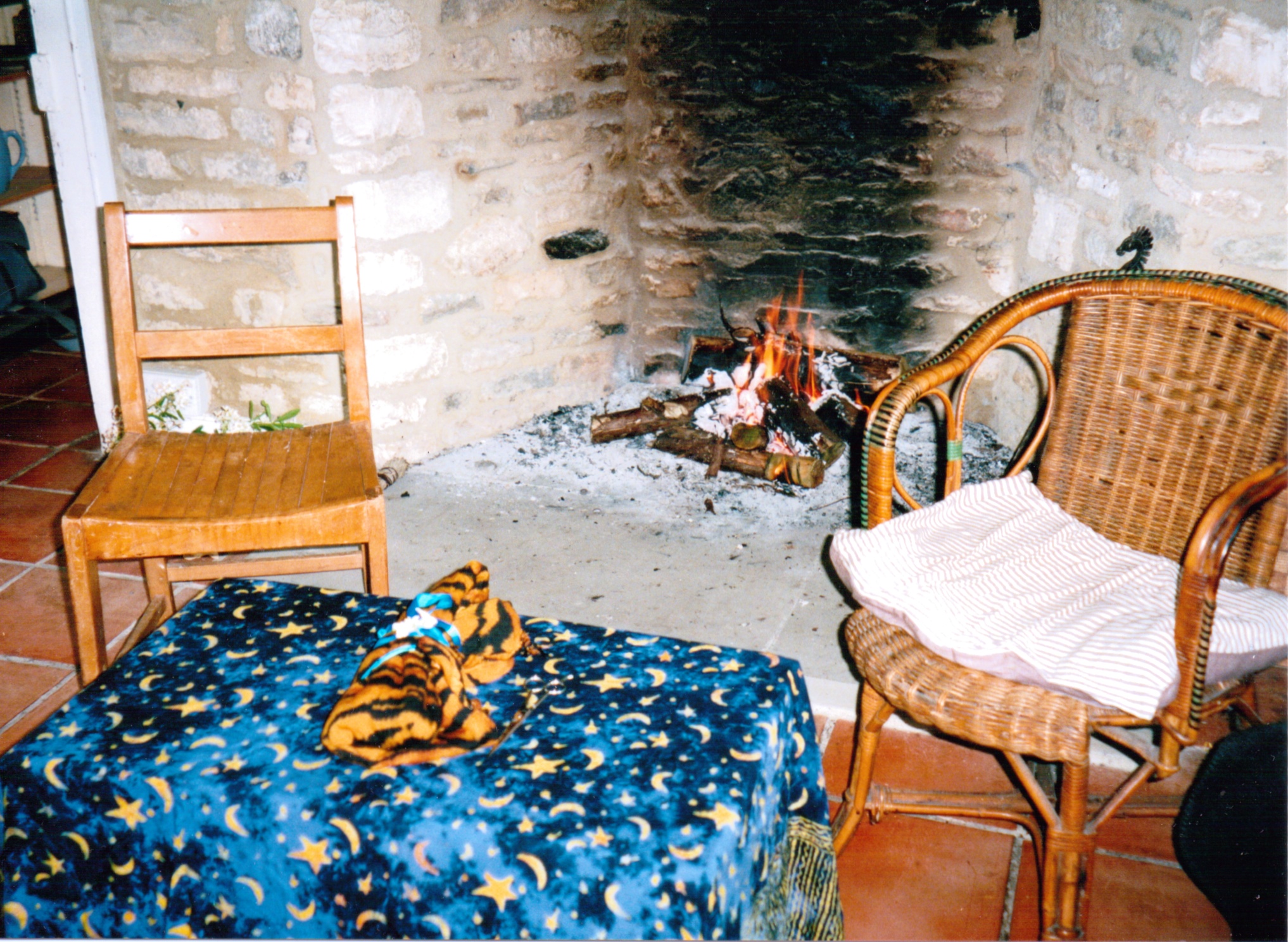 When the day came, I was desperately nervous.  It happened at a time when my husband and I weren’t normally able to be in the same room as each other, and I thought it quite likely that he wouldn’t show up.  However, once we all there, I felt very supported.  We began with a round of appreciation for all the good that our marriage had contained.  We spoke, and our friends did too, reminding us particularly of good times they’d shared in our home.

Then we began taking a sharp pair of scissors to the pieces of wool.  We undid the scroll of paper, read the label and spoke as we felt moved to.  Then one or other of us cut the wool, unwound it and put it in the fire.  Sometimes people spontaneously added comments or well wishes.  There were moments of intense sadness, but also boldness and laughter.  When we came to the strand for ‘love’ we didn’t put this in the fire, but kept our halves of wool.  I tied mine around my wrist for a while.

With that done, we were pretty drained, and it was good to pass around a bottle of whisky and toast our futures.  One of our friends had made cards for each of us, with an image on the front of a butterfly, and someone else gave one of a ship.  What brilliantly inspiring images to see every morning as I awoke to the adventure of my new unmarried life. 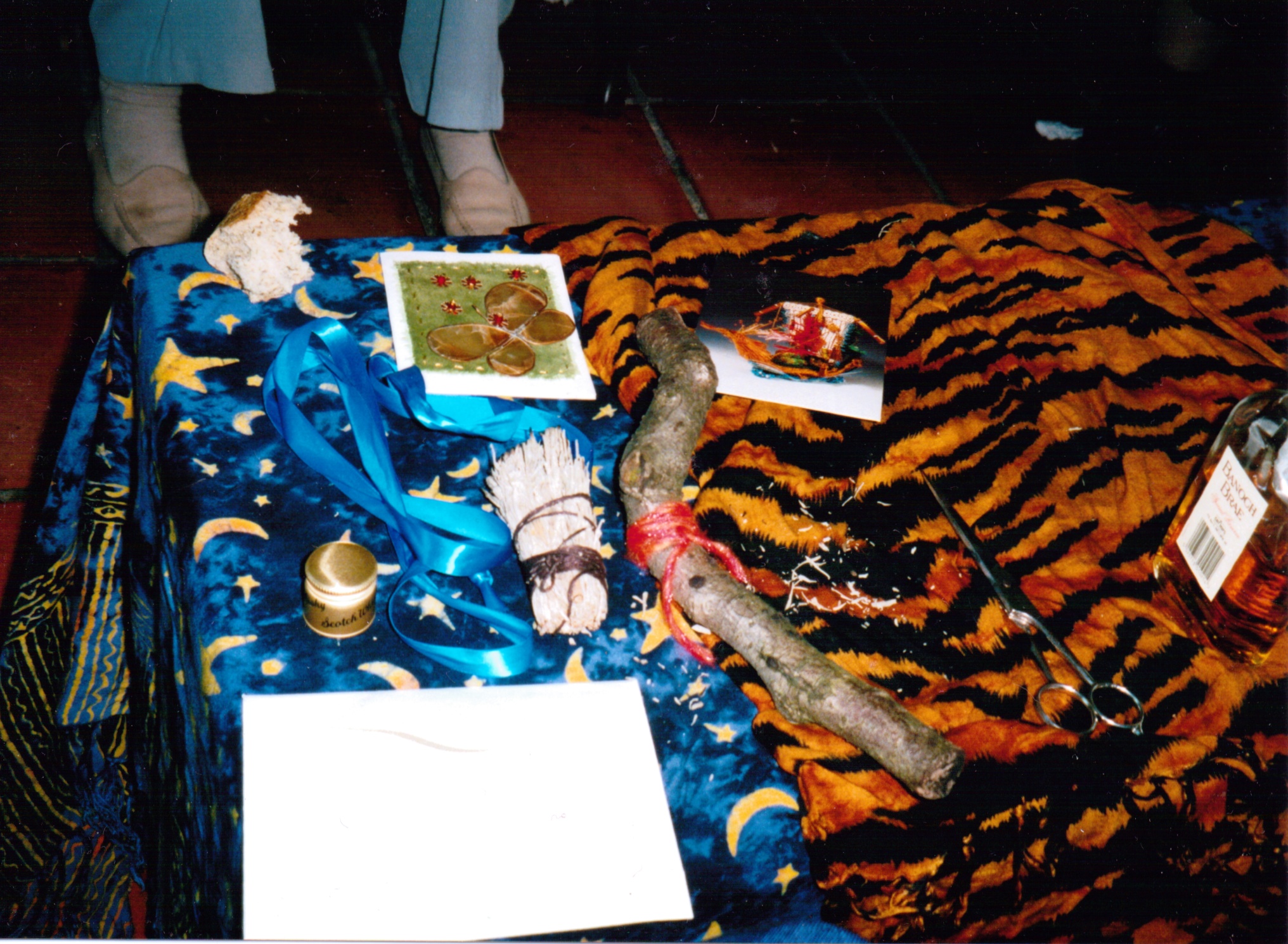 We came to the moment of leaving, as we had planned, by different doors.  This mirrored our wedding, in which we had arrived through separate entrances and left together.  I elected to bring a friend with me, a woman who had been ‘best woman’ at our wedding.  We walked out of the front door and down to a bridge, where I threw my stick into the river. Then we came back and had tea and cake, and hugs all around.  It was the clearest and strongest I had felt for a long time.

If there was something I missed out of our ritual it was probably about forgiveness.  Maybe we should have spoken everything we were sorry about, and thrown a bucket of water over each other!

I wish I could say that after that we had no more conflict as we negotiated our separation.  The truth is a lot more human.  I’m not sure that there is any way to leave a partner without suffering, and anger seems to be one of the emotions that helps us cure the habit of depending on one we’ve been close to.  What the ritual did do, however, was declare the intention of our highest selves to separate with respect.  As I said in my book, Birthrites, (http://www.jackiesinger.co.uk/content/birthrites) “When we make a ceremony, we shoot an arrow of intention into the future, and start walking towards it.”  I can say that now, ten years since the occasion, I am very happily remarried, and on good terms with my ex.

Divorce is one of the big challenges of modern life that many of us face, and there is not much in our culture to help us navigate it as a rite of passage. Yet it matters.  How we leave one relationship can have a huge impact on how successfully we can build another.  When children are involved, there is all the more reason to act with as much respect and compassion as possible.  And, like any challenge it presents an opportunity for spiritual growth.  Facing it with courage and open-heartedness can turn it from a bleak ordeal into an initiation.

I share this story in the hope that it may prove an inspiration to others, not as a script for a ritual, but as an example that you may adapt for your own uses.  If both partners do not want to work together, it is still good to do on your own, and even better if you can have a supportive witness.  If you have a story to share, please do leave a comment.  It would be great to build a library of resources here.

3 Comments on “A Divorce Ritual”