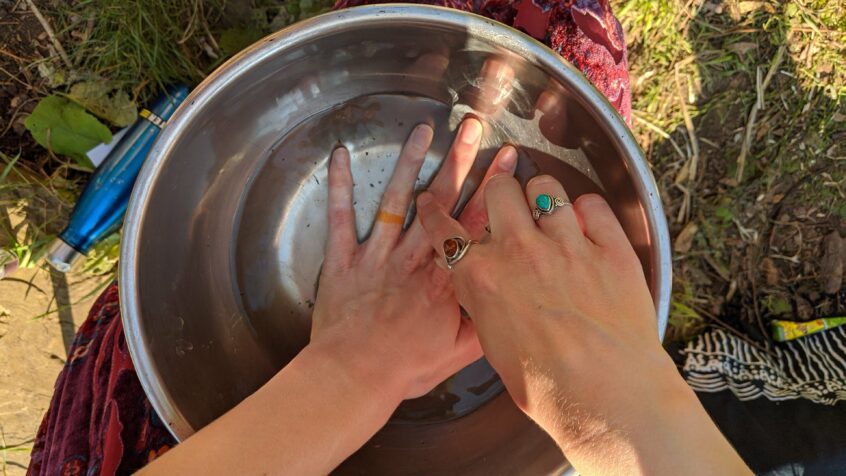 In this blog I’m delighted to introduce Holly, a creative young woman, who invited me to co-design and hold a personal ceremony of  ‘commitment to self’ last month.  This is her story, told in her words and mine. 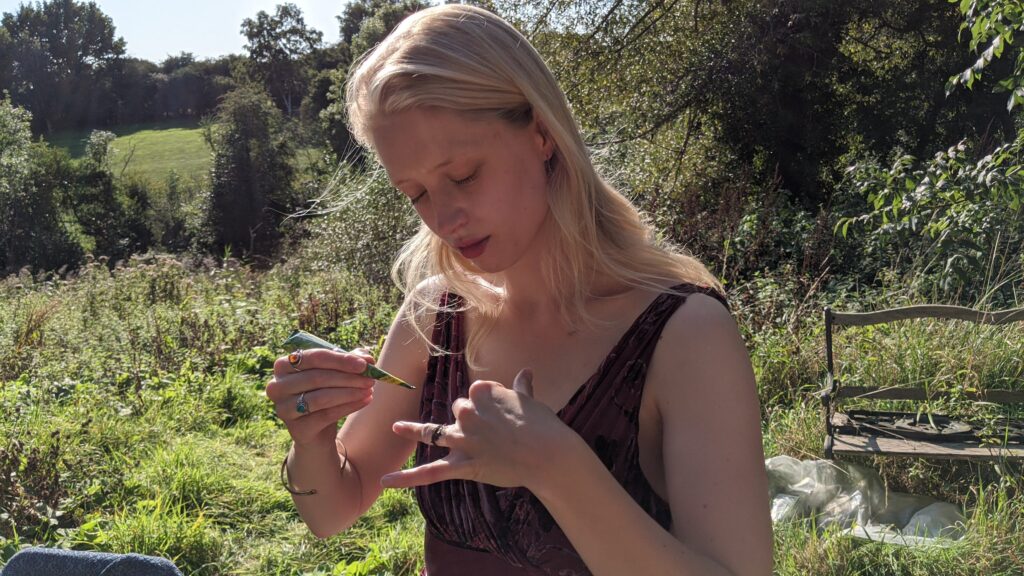 Holly: “In September, Jackie held a space for me to honour my relationship with myself.  It was a ceremony of self-love, self-reliance and a celebration of life.  The idea of this ‘self-marriage’ came to me early on in lockdown.  I had been through a difficult time – the end of a relationship, having to leave a place I loved, and disappointments in my professional life.  Through various spiritual practices that came into my life at that time, particularly meditation, yoga and personal counselling sessions, I found some inner strength and a huge gratitude for my life.  I realised that the most important relationship I will have in my life is the one with myself.

I felt the need to share this realisation with my friends and family, and to make a public commitment to myself. I also wanted to give my loved ones an opportunity for inward reflection. I had recently felt drawn to ceremony and ritual and wanted to learn more about it, so I contacted Jackie, who helped me shape the event.”

For me, the most important thing when designing a ceremony is clarifying our intention – what is it we really want to do?  When I first spoke to Holly, she was a bit muddled about whether the ceremony was for her or for her friends.  When I asked the question it became clear.  It was for her, but it was hard to admit this, as she was nervous of being the centre of attention.  She also had a real desire to share something of value with her friends, and offer them a space for reflection.  So we made the ceremony with a clear focus on Holly, but with opportunities for others to take part too. 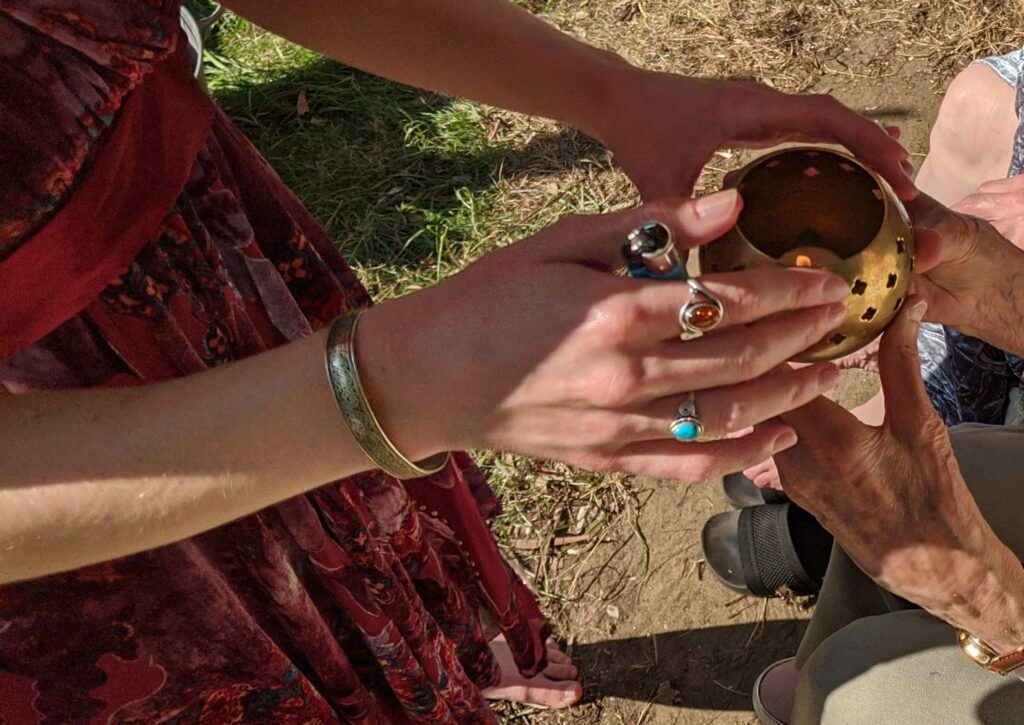 Finding the right words, songs, practices and symbols took a couple of meetings and a few exchanges of drafts by email.  It’s a magical process, teasing apart what is the emotional and spiritual core of the ceremony and marrying this with what’s practical and flowing for the people, the place and the time of year.  As is often the way with a creative process, we started off with lots of ideas and gradually honed it down to something simple.  It took a while to find a venue, which we eventually did in the lovely wild garden of a friend.  The weather blessed us with a gloriously sunny Sunday in September, and we met with a few close friends of Holly’s, her mum, dad and Granny.  Luckily, the date we agreed turned out to be just before the stricter Covid-19 restrictions on meetings outdoors came in, so we were able to have a small gathering.

Holly: I have to admit that I was quite nervous in the run up to the ceremony, because it’s not a very common thing to do. In fact, I’ve not (knowingly) met anyone that has done this kind of thing before.  I was excited about seeing friends from different places, and a bit nervous about introducing them to one another.  At the last minute I invited my family too, and I didn’t know what they would make of it. I was so glad Jackie was holding the ceremony.  At one stage I thought I could lead the ceremony myself, but that would have been crazy, because I would have been trying to do two things at once.  One of the strongest memories I have now was being smudged – just closing my eyes and settling in to deep peace, even amidst the excitement and nerves. 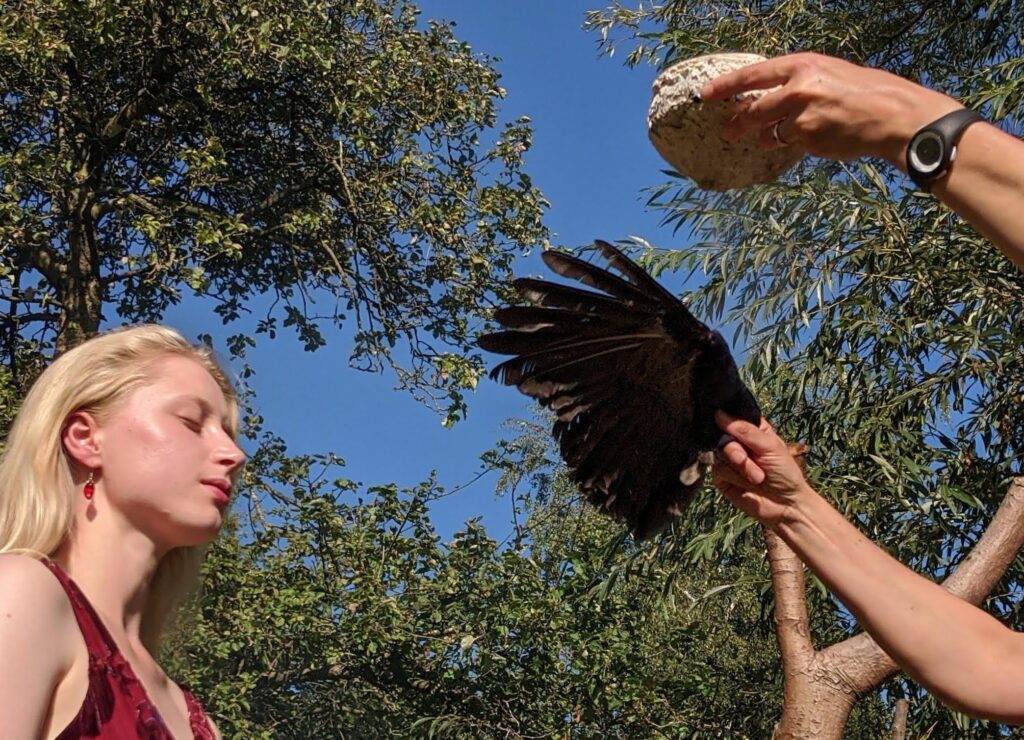 We started with a poem:

“After a while you learn the subtle difference

Between holding a hand and chaining a soul . . . “

(Comes the Dawn by Veronica Shoffstall)

There was a moment of connecting with our ancestors.

Holly: I‘ve long been intrigued by my female ancestors, and how I might connect with them. This ceremony gave me an opportunity to do just that. I created an altar with photos of them, and I wore my great-grandmother’s jacket. At the beginning of the ceremony I asked for their blessing and thanked them for the sacrifices they made so that I could live. 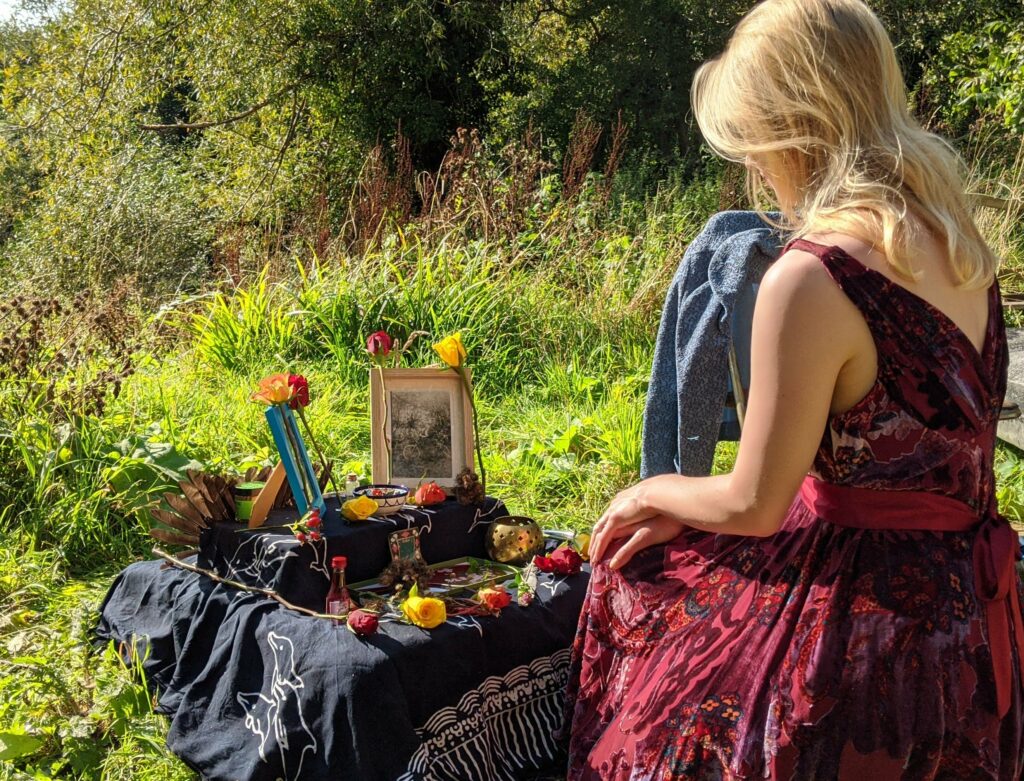 There were rituals related to the season of Lammas, the time of harvest, and we invited everyone to take part in these. We collected treasures from the garden and put these on the altar to help us connect to gratitude.  We identified what was no longer serving us and left it behind in the fire.

Then we invited Holly’s mother to give her a blessing with water.  It was a significant and tender moment between the two of them.  Then we reached the central ritual in the ceremony, which reflected the marriage rite.

Holly: I spoke vows to myself, witnessed by everyone, and drew a henna ring on my ring finger.  In time I plan to get a tattoo so that this can be permanent.  It’s a symbol of the primary relationship of me with myself, and leaves space for a wedding ring on top, should I find someone that I want to marry at a later date. 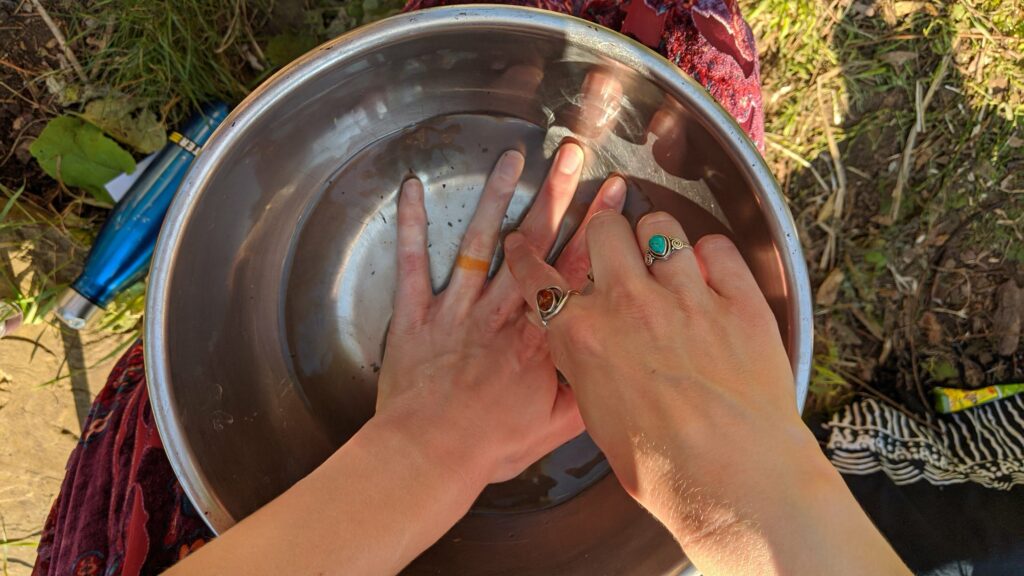 There was a wonderful moment of spontaneity when it was time for Holly to make her vows.  We had planned to pour a little spirit on the fire after each vow, as a way of giving power to the words.  However, as the weather was so hot, and in deference to the neighbours, we had made the fire very small, so by now it was nearly out.  It felt wrong to rekindle the fire at this moment, so the obvious thing which occurred to both me and Holly at the same time, was for her to drink the spirit instead.  It was a little bottle of cherry schnapps, a gift from a close friend’s wedding, which she had kept on a shelf for some occasion or another.  It looked a lot like a love potion, and worked perfectly as a sweet toast to herself after each vow.  We cheered as she drank, and children in a nearby garden joined in the cheering. 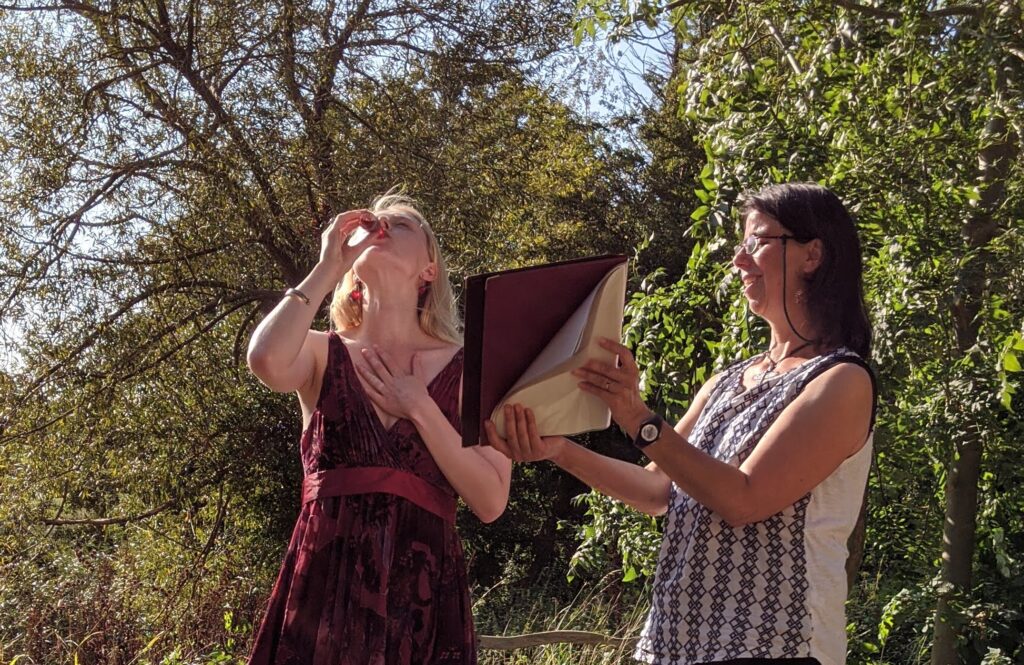 Towards the end of the ceremony, we passed around a mirror, taking a turn to look at ourselves with the eyes of love, while everyone sang,

‘Beauty is Eternity, gazing at the mirror,

But you are eternity and you are the mirror’

I was moved to watch everyone take their turn for inner ‘reflection’.  I have a strong memory of looking at my own not-so-young face, all too familiar from Zoom calls, and yet in this moment full of mystery and a beauty that belongs not to grooming, but to the lines of ancestors before me and the lines of my own life experience.

I read a few messages from friends who couldn’t be there but sent love and support.  The very end of the ceremony brought us bang up to date with a great dance track: ‘Soulmate’ by Lizzo.  How wonderful that modern technology means we can now so easily play music from a phone through a mobile speaker in a garden.  It was a moment of fun and release.  Afterwards, there was feasting and wine and toasting, and the most beautiful sense of warmth and community. 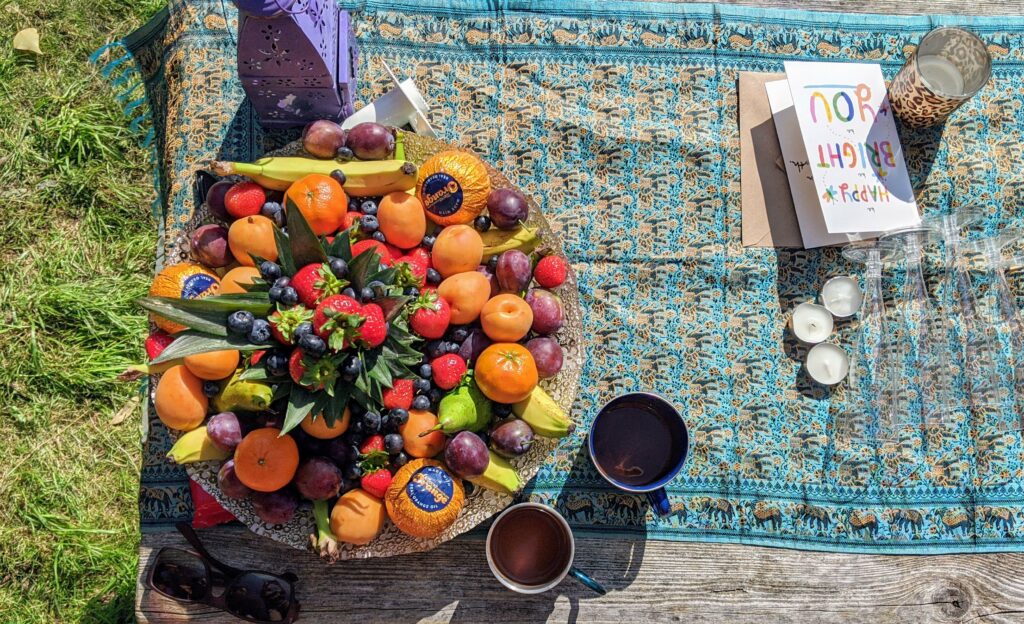 When we make a ceremony, we take time out from the usual daily round and fire an arrow into the future, which we then begin walking towards.  I caught up with Holly a month later and asked her if the ceremony had had an impact on her life.

“Massively,” she said.  “I feel I have given myself a gift.  I have my vows printed out on a card next to my mirror and in good and bad times, I know I will support myself and protect myself.  Recently I was sad about something, and my first response was, ‘Oh cheer up, it’s not so bad.’  Then I realized I could hold myself in that sadness and experience it, which was much healthier.

A lot of people who were there contacted me afterwards and said the ceremony was a gift to them too.  They were able to open up about something or leave something behind.  It was a safe, non-judgmental space in which they could be with some vulnerability.

I loved that my family accepted it.  It has shifted my relationship with them too, because we’ve been through a rite of passage together.  As for relationships with others, I feel I’ve made a solid foundation on which to build a relationship – a healthy bed to start planting something new.”

Holly is not saying any more about that for now, but I’m watching with interest. Does she have any final words?

“As my first foray into ceremony and spirituality, it was a total success. I look forward to celebrating my anniversary!” 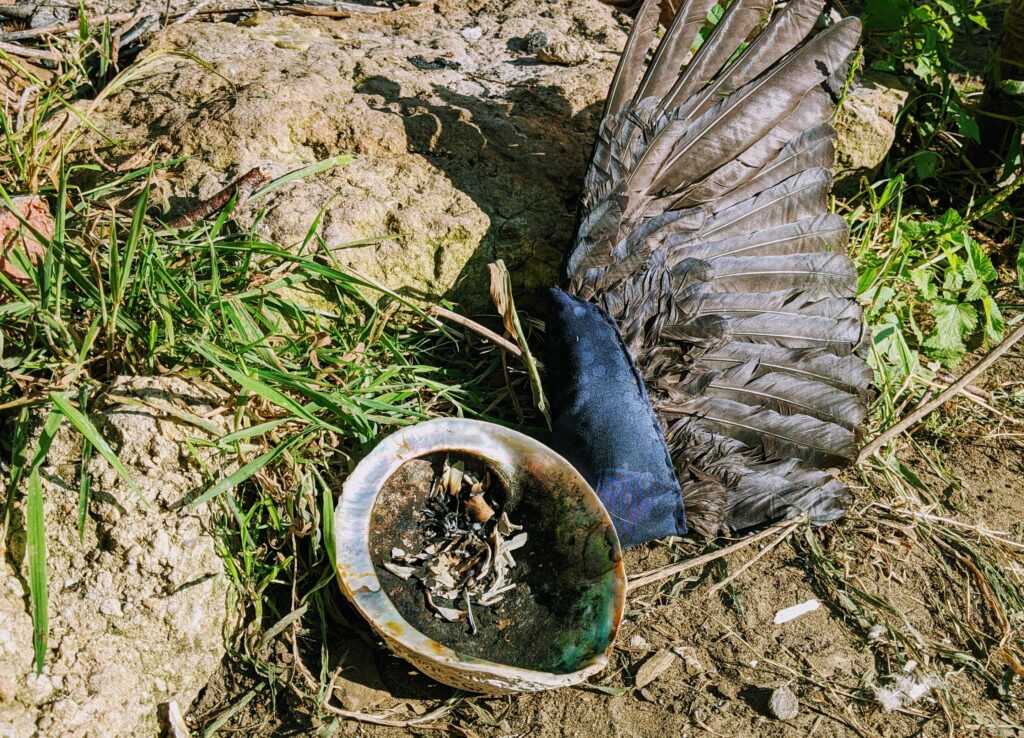 Perhaps there is a transition in your life that you’d like to mark with a personal ceremony?  I have created ceremonies for all kinds of occasions (see more here) and can offer everything from a free initial phonecall to a fully held space – which at this time could be outdoors or even on Zoom.  If you’d like to discuss creating a ceremony for yourself or a friend, do contact me.

With many thanks to Emily Marshall for all the photos.

2 Comments on “‘Self Marriage’ – A Personal Ceremony”