What is an empowered woman like?  I keep returning to this question and wondering.  What is the nature of feminine power?  Is it different from masculine power?  Do we have any models?

A year and a half ago I went to a Women and Earth Retreat, at Pistyll Rhaeadr in Powys.  The long weekend was run by Annie Davey and Hilary Kneale (see http://www.thenatureeffect.co.uk), at a campsite next to a magnificent waterfall. 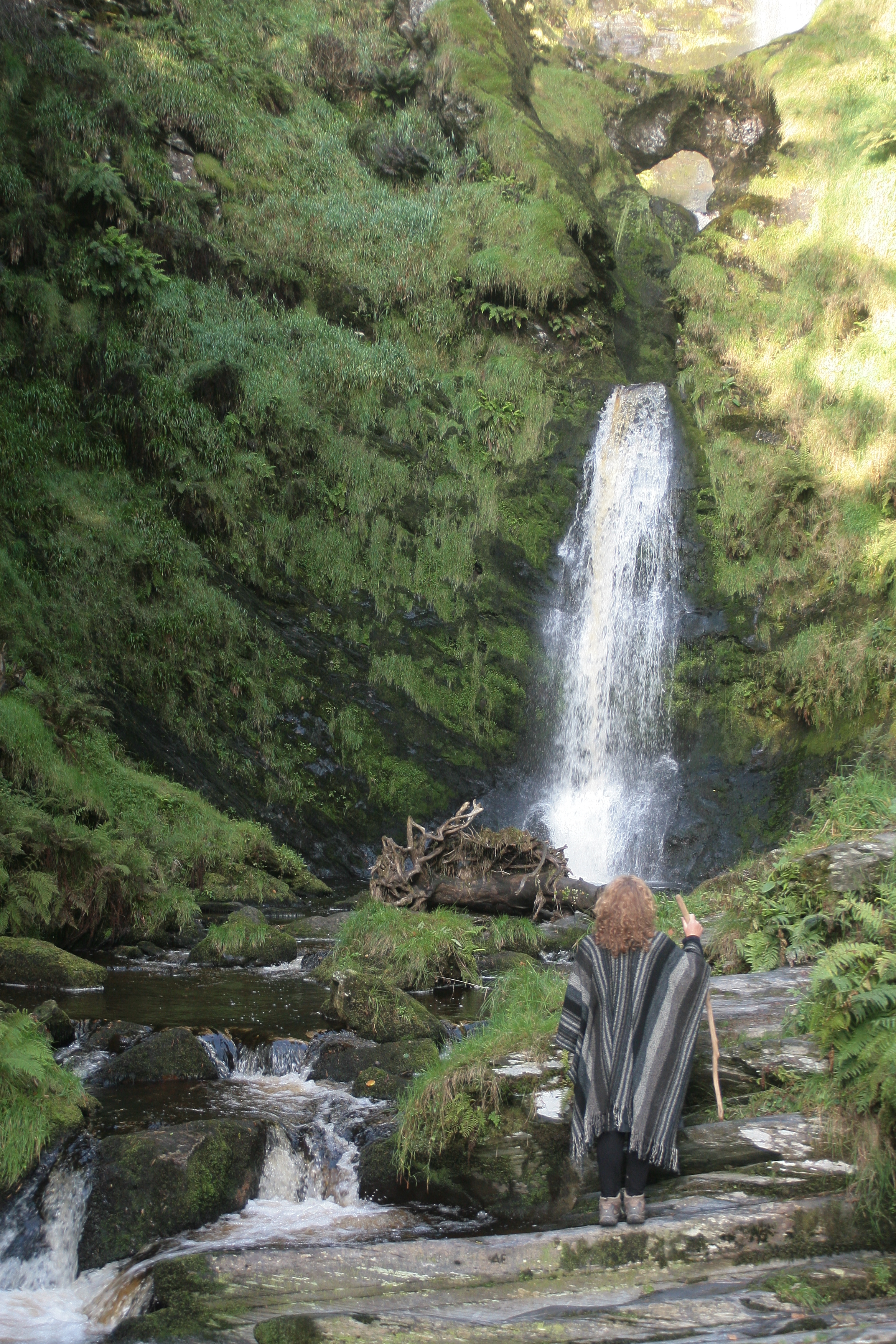 At that time, as a mother of two small children, trying to keep my creative practices alive, and keep some money coming into the family coffers, I was feeling more than a wee bit weary, and yet I felt such a strong drive to make waves in the world.  I travelled with this question: how can I step more fully into my power?  It was the element of water that spoke to me in reply.

On the first bright, clear morning, we walked up the river valley to a mountain lake, and spent time sitting quietly by its shore. After a while, I bent low to the water, and noticed a tiny sound.  Droplets of water were rolling from the soft moss into the lake. As I listened to their delicate music, I marvelled at how these sweet droplets were made of the same stuff that filled the great lake, and which had, over millennia, carved the entire valley. I was put in mind of the daily tasks of mothering, which in themselves are so small, yet which add up to something great.  ‘Take heart’, the droplets seemed to say. ‘Each sandwich made, each sock hung up to dry, each goodnight kiss is a droplet that partakes of the great lake of love, which has huge power.’  This put me in mind of Mother Theresa’s advice that we should not pursue “great deeds” but rather “small deeds with great love.”

Later on that day, we chose the spots on the land where we would be alone for the next twenty-four hours.  My place was sheltered by a sycamore tree, right by a stream. All day and night, the stream sang to me.  I couldn’t see where the source of this flow was, it just endlessly poured by.  I often sang along, and a little ditty emerged: “From deep within, your blessings flow. You are the spring, you are the flow.” In a world where I am regularly looking for affirmation from outside (a good pay packet, an award for achievement, preferably both), this was a beautiful reminder to look within for both affirmation and inspiration.

Within the last hour of our solo time, the sky grew overcast, and it started to rain.  I was glad to pack up my sleeping bag, and head for shelter, warmth, food and company.  By the time I woke up early the next morning, it had been raining for 15 hours. As I wandered from the tent towards the shower block in my anorack, I became aware of a roaring sound. Looking up, I was stunned by the sight of the waterfall in full flow.  What had been a graceful, white, maidenly fall of water when we had arrived, was now a thunderous, red Mumma in full power. I abandoned any thoughts of showering or breakfast, and headed straight for the waterfall.  “YOU WANT TO SEE POWER?” she yelled, “I’LL SHOW YOU POWER!”

Here was charge enough to pound rock, and carry away trees: a vivid demonstration of what happens when millions of those little drops of rain from upstream run together.  I kept a wary distance, but got soaked anyway.  And a new song started forming in me . . .

Mother you call us home,

And all our journeys are as one,

And when we flow together,

Then we are strong.

And our power is the flow.

Come on and let your passion grow.

For the water knows no stopping,

And the water knows no pain,

So bring your burden to the water,

And be free again.

I’ve spent more than a year pondering the teachings from this retreat. I went with a question about power, and came home with an answer that was all about nourishment upstream.  As a woman, especially a mother, it’s easy to run dry.  Yet those little drops of love – a sandwich here, a kind word there – fill us up again, ready to flow, effortlessly.  To be really powerful, we need really good nourishment upstream. And we are even more powerful, when individual tributaries meet.

Starting a monthly women’s circle last January has given me a tangible sense of what magic can be unlocked when women make a commitment to collaborate, celebrate and nourish each other. This is far from the Patriarchal idea of power, in which for me to be lifted up, someone else has to be subjugated. No, this is what the American activist / author / ritual-worker Starhawk defined as “power with” rather than “power over”. Individually, we each have our cycles of giving and needing to receive. If we carry on giving, we burn out. But by leading collectively, we take our turns to serve, and be served, as the need arises. In this way we flow together. We are strong like the water. And, as the water has been showing us abundantly over the past three months in this country, that is very powerful indeed.